The 10 Best Note Taking Apps for developers in 2020 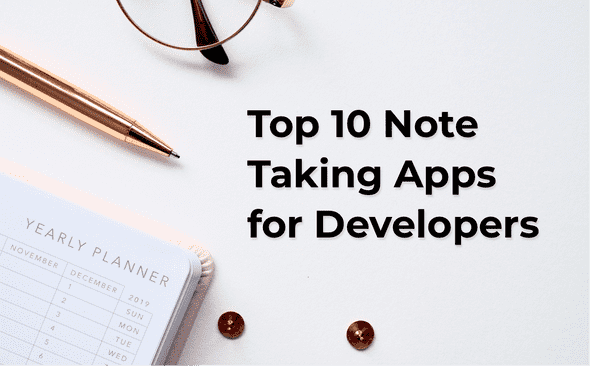 With the new year upon us, it seems apt to look at how we can get organized for the coming months. I’ve gone down a rabbit hole recently, looking at various note-taking apps. I’ve compiled a list of the top apps.

When looking for a note-taking app, there were a few features which I was looking for: Markdown support - support for GitHub flavored markdown. Organization - tagging or the ability to create a hierarchy Inline Text Editor - being able to write markdown inline without the need for a side-by-side view. Cross-Platform - being able to access notes on your desktop as well as when you are on the move.

Some of the things I use these apps for are: taking meeting notes, organizing my daily todo list, planning longer-term goals, collecting recipes, and planning side projects.

In no particular order here are the best note-taking apps in 2020:

Evernote is one of the most ubiquitous note-taking apps out there. It has a solid text editor with a wide variety of features, such as tables, nested lists, file attachments, and font colors. You can also set reminders on notes, something that most apps on this list do not allow.

The organization system is solid. You can create notebooks to group notes by topic. Notes can be tagged and searched by tag.

While Evernote has a solid feature set and great cross-platform support, it falls down in one key area, markdown support. I would consider this a must for any note-taking app for developers. The organization of notes is also somewhat limited in that you are restricted to notebooks and tagging.

Summary: Evernote is a solid choice if you can forgo markdown support. For non-developers, it’s a strong note-taking solution.

Typora is a minimalist note-taking app available for desktop only. The inline editor is beautiful. Of all the note-taking apps I’ve tried this has one of the strongest editors. It has support for tables, various font families and nested unordered lists. Markdown works great in this editor, with a very seamless experience.

Sticking with the minimal approach, Typora allows you to organize notes using folders and subfolders. Markdown files are used under the hood for storing your notes. There is currently no tagging system which can make it difficult to organize notes across different functions.

Summary: One of the best editors on the list. A minimalist approach is taken to organizing notes.

Microsoft OneNote is a feature-rich note-taking app. It uses a similar system to Evernote for organizing notes, with notebooks being the main mechanism. OneNote does also allow you to create sub-pages though. More recent versions do have custom tags, though the UI for this is clunky.

The text editor has a large feature set. Most users will be familiar with the Microsoft Office UI. Tables, nested lists, attachments, to-do lists are all supported. There are also drawing tools, which is something that most other apps on this list are missing.

Like Evernote, a big drawback is the lack of markdown support and the plethora of features can seem overwhelming at times. I found the simpler todo apps were more pleasant to use.

Summary: A feature-rich to-do app with no markdown support. Windows users will be at home with OneNote.

Bear is a beautifully crafted note-taking app. It features a fantastic inline text editor, with good markdown support. The current version of Bear is missing a few markdown features, such as tables and full support for indented lists.

The UI is excellently designed. There are a number of view options, that can allow you to move between an editor view and a menu view. The various themes help to create an excellent aesthetic. It’s clear the team behind Bear has taken great effort with the design and UX.

Where Bear really shines, is its tagging ability. You can tag notes within the editor itself using a #. Bear supports the nesting of tags allowing you to create a hierarchy while organizing your notes. Multiple tags are supported on a single note. The side menu is centered around these tags.

Bear does have a few notable drawbacks. It currently does not have an Android app or a web app. For those who are not fully bought into the Apple ecosystem, it means having Bear as your single note/todo app can be difficult.

The editor, while excellent does not have the flexibility of Notion or Slite.

The functionality of Notion goes far beyond note-taking. Its feature set boasts pages, databases, wikis, templates, todo, and boards. It offers a huge amount of flexibility and customization. Templates leverage this flexibility and provide examples of how to create pages for specific tasks. Examples of templates include a recipe book, a Kanban board or a CRM.

The inline text editor itself is very strong. It has solid markdown support and allows for multiple columns and drag n drop. It is missing a few markdown features such as proper nested lists and tables.

The one notable thing missing in Notion is tagging notes outside of a database. If Notion had the tagging functionality of Bear it would be close to the perfect note-taking app.

The fact that Notion themselves use the app for their support docs and release docs is a testament to how flexible the application is. This is where Notion really shines. If you want a do-it-all note-taking and organization app, look no further. It’s not the strongest in any one feature but it does most things very well.

Summary: A do-it-all note-taking app that is strong in most areas with strong cross-platform support.

Boostnote is an open-source note-taking app built for developers. It uses a straightforward side by side editor. It has good markdown support which includes tables, lists and code blocks.

The editor itself is pretty basic. For me, inline editors such as Typora and Bear offer a better note-taking experience.

Boost Note is pretty strong when it comes to organization. It allows you to tag individual notes and the side menu allows you to easily find notes by tag. You can store notes in the cloud or locally.

Summary: A note-taking app with a basic editor and good organization.

The Notable UI is simple, clean and easy to use.

There is no mobile or web version at this time.

Summary: A free no-frills note-taking app for desktop with tagging and markdown support.

Dropbox paper provides a great online note-taking experience. It has good markdown support and a fantastic inline editor. It allows teams to collaborate on notes with features such as commenting, todo, and sharing. The organization of notes is pretty bare bones. You can create folders and subfolders and that’s it.

Dropbox paper is currently only available on the Web; meaning that, internet access is needed when accessing your notes.

Slide bills itself as a collaboration tool and note-taking app all in one. It features a beautiful UI and excellent text editor. The drag and drop functionality and markdown support make this one of the strongest editors on the list.

Slite is aimed at teams. It allows you to create organizations within the app to share notes across teams. You can use Slite as a wiki for your team or as your own personal note-taking app.

Slite uses the concept of channels for organizing notes. The side menu that allows you to browse channels is beautifully designed. Unfortunately, there is no tagging support for now.

Summary: Slite is a great option for teams and organizations who want to share notes and create wikis. It has one of the strongest text editors and a beautiful UI.

StackEdit is a straightforward markdown editor that concentrates on integrating with platforms such as Google Drive, Dropbox, and GitHub.

Its UI is certainly not the prettiest on the list but as a note-taking app, it gets the job done. The editor is quick and easy to use.

The organization is basic and relies on folders with no tagging support.

Many of the apps on this list focus on different areas. Several present themselves as an all-in-one solution for documentation, wikis, and note-taking. Others focus on offering an inexpensive note-taking solution specifically for developers. Each app has its own specialty and no one app performs perfectly across all areas.

I made a conscious decision to ignore the price. Most of these apps are inexpensive and if you use them correctly should be worth far more to your productivity than their price tag.

With that being said, here are my picks of the bunch:

This was a close race between Note, Bear, and Slite. Notion’s flexibility and cross-platform support make it the best all-in-one solution. It has a huge feature set and a good editor. If you want to use a single app to store notes and stay you organized, look no further than Notion.

There is little to choose from both of these excellent editors. Both have excellent markdown support and a clean inline editor. Typora is best if you need offline support. Dropbox wins if you want to collaborate. Slite should also get a special mention here.

I’m a huge fan of Bear. Its note-taking experience is great and its tagging is an excellent way of staying organized. The UI is pleasing to use and beautiful on the eye. All it is missing is cross-platform support and some extra features in the editor such as drag and drop.

With so many options for note-taking apps and so many features available there is a good chance that I missed out on some features. I will gladly update any of the points above to fix inaccuracies.

I use a combination of Notion and Bear. Notion for ToDo’s and project planning and Bear for note-taking.